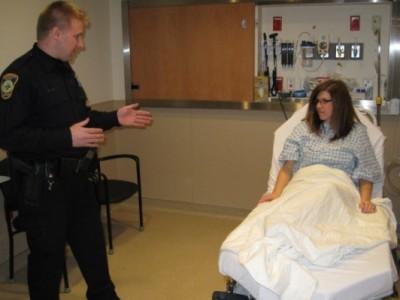 The Hospital Resource Officer (HRO) is a newer position with the Wooster Police Department and was conceived as a collaborative effort by the City of Wooster Police Department and the Wooster Community Hospital. The HRO program is fully funded by the Wooster Community Hospital and originated in January of 2012 and has been a success for all. The program assists in providing safety to the patients, visitors, employees, and hospital property by having a City of Wooster Police Officer on site conducting regular patrols around the interior and exterior of the facility.

HRO Josh Miller of the Wooster Police Department has a very social and calming personality and specializes in working with the large amount of mental health issues that enter the facility and de-escalating potentially disruptive and dangerous situations.

Officer Miller regularly assists with issues involving suicidal and drug overdosed patients to victims of domestic violence and sexual assault. Officer Miller is a key factor in keeping safety and peace at the Wooster Community Hospital and is valued by the staff. Officer Miller was also awarded the Crisis Intervention Team / National Alliance of Mental Illness Officer of the Year award in 2014.